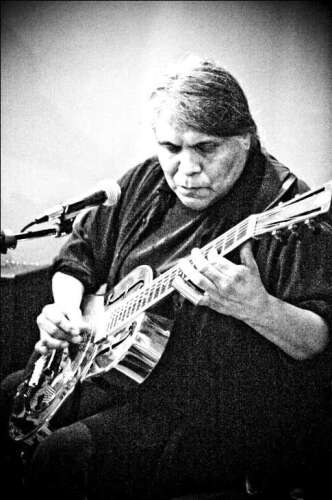 The first man to take the stage at the Poverty Bay Blues Club has bowed out.

One of the band’s founding musicians, Dave Galanin, passed away earlier this month, but his memory will live on in Gisborne.

In memory of the musician, the club decided that the first event of the month would be Strummin Dog Night, in honor of Dave’s stage name.

Poverty Bay Blues Club founder and vice-president Darryn Clyne met Dave at his store, The Gisborne Deli, in 2004, when he and his daughter Natalie were there to buy smoked salmon.

Dave asked Darryn if he could get a whole salmon so he could process it himself. As a Tlingit native of southeast Alaska, he knew a thing or two about fish.

“I said yes as long as he showed me his technique. So when I delivered the salmon to his house, entering the living room, I was stunned by how many guitars he had.

Between Dave’s 20 or so guitars, the duo played music for a few hours and Darryn forgot he was there to learn more about fish.

“That’s when I realized we had a monster musician among us,” Darryn said.

“David was probably the genesis of the blues club. . . to have such a prodigious talent among us was too good an opportunity to pass up.

Two years later, in November 2006, the Blues Club started and Dave was the first musician on stage and one of four musicians who stood up and performed monthly for the first year.

Dave came to Tairāwhiti in 2000 when he was invited to participate in Te Ra, a gathering of over 80 Indigenous artists to exhibit their art and conduct workshops in their respective art forms.

Kaumatua Ralph Walker said that since then Dave and his whanau have been whangai (adopted) by the local iwi.

Dave lived in Gisborne for almost a decade before he left, but his presence here lasted.

With Tairāwhiti heading to the orange traffic light starting at 11.59pm tonight, the restrictions on the Blues Club’s first night will be relaxed a bit and customers won’t have to sit down.

The Blues Club will host Strummin Dog Night on January 4th next week at the Dome. Door fee of $ 5 or free for Poverty Bay Blues members and participating musicians.

BLUES MAN: Dave Galanin of the Poverty Bay Blues Club passed away earlier this month, but Strummin Dog Night will be remembered as the first club night of the year. Photo provided

Indonesia will continue to develop digital talent in 2022

12 companies hire more than 200 positions in Toronto in January

“Start Up Grand Challenge” to attract talents for solutions related to…